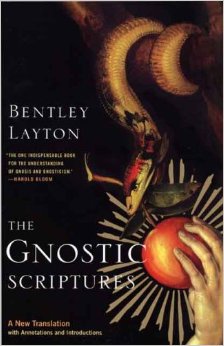 Apocryphon of John contains one of the most complete and detailed narrations of a gnostic cosmogony, explaining how the invisible and visible realms emanated from the original monad in a highly sophisticated narrative. The tractate takes the form of the popular “apocryphal acts of the apostles,” after the Greek “romances”, pseudepigrapha attributed to the disciple John, son of Zebedee.

After a Pharisee in the temple questions John’s savior, he enters the desert, turning toward Mount Olive. While he is standing alone, lamenting over his lack of understanding, the heavens open up and he says, “all creation shone with that light and the world moved,” causing him to be afraid. And within that light, he saw a child, but the child was actually a multiform image, with the “manner of appearance” of the child, an elderly person and a young person “appearing through one another” in “three forms.” This being, the genderless forethought/Barbelo/Christ, announced itself as the father, mother and son, “the undefiled and the unpolluted”, come to remind John about the invisible and visible realms, the perfect human being and the structure of history, so that he may communicate these things to those like him “in spirit,” who are from “the immovable race of the perfect human being.”

Christ/Barbelo begins by describing the “unit (monad)” in terms of apophatic/negative theology, a process of describing the ineffable in negative terms in order to demonstrate language’s limited ability to communicate this reality.

In the notes, Layton informs us that some manuscripts describe it succinctly thus: “It is neither infinite, nor has it been limited; rather, it is something superior to these,” indicating that the monad’s true nature exists beyond our ability to describe or understand.

Then (although time does not exist in this process), like a metaphor for reflexive thought, this indivisible whole contemplates itself, gazing on its image in the light radiating from it (which is an overflowing “wellspring of living water”), objectifying itself through its own act of self-reflection. The reflection/image then takes form as “the first power”/”the perfect forethought of the entirety,” Barbelo. The overflowing radiance that provides a plane for reflection and the space around the parent that allows for emanations all, linguistically, suggest a paradox about the original monad’s fullness. However, as an allegory for self-reflection, these emanations could be viewed as occurring internal to the monad, which is all encompassing. In any case, the first section informed the reader of the limits of linguistic understanding of this process. Ultimately, the process serves to preserve the unity and innocence of the monad while explaining the existence of a corrupted material world.

This is further accomplished by naming Barbelo, “the image of the perfect invisible virgin spirit” as a “womb for the entirety,” both a replica and extension of the monad and wholly responsible for the existence of all that is yet to come. While basking in the monad’s radiance, Barbelo is endowed with emanations to become an androgynous “quintet of aeons,” the “first human being,” and conceives the “luminous spark/self-originate,” which the monad anoints with its “kindness until it became perfect”, making it the Christ. According to the text, however, the Christ does not equal its parents’ magnitude, suggesting a series of diminishing returns as the images reproduce. Further, because Christ and Barbelo are eventually reunited as the narrator of this text, it suggests Christ is the male partner of the originally androgynous Barbelo, a reflection of the indivisible monad, which represents wholeness. This would present the creation of Adam and Eve as a reflection of this process, whereby Eve/Zoe is taken out of Adam, the human being, a reversal of the cosmic process.

Christ is further endowed with intellect and Logos and established as the “true god,” before producing four luminaries and twelve aeons powered by the monad’s will. In the first eternal realm, ruled by the angel Harmozel, the “Geradamas”/”perfect human being” manifests, praising the spirit, Barbelo and Christ, “unto you that the entirety will return,” possibly suggesting a cosmic cycle of emanation and absorption that would maintain the unity of the original monad.

One of the aeons of the second eternal realm, “afterthought,” produced an image without the aid of “her” consort (feminine will apart from the androgynous whole), producing an “imperfect product…serpentine, with a lion’s face, and with its eyes gleaming like flashes of lightning.” Afterthought cast it into the lower realms and hid it in a luminous cloud (a parallel to Hephaestus, the grotesque divine craftsman cast from Olympus?), calling it Ialtabaoth. This “first ruler” stole great power from her and engendered twelve archons, seven to rule over the lower seven heavens and five in charge of the depths of the abyss. These rulers produced powers for themselves, resulting in 365 angels.

The first ruler created the material cosmos “according to the image of the original aeons” and a human being according to an image of the Geradamas and its son, Seth, projected into the waters of the abyss. This Adam was “inactive and immovable,” so Barbelo sent five luminaries to impersonate the first ruler’s angels of the abyss and trick him into breathing some of his mother’s power into the body, giving Adam greater intelligence than his creators.

Barbelo then has pity for Afterthought’s lost power and sends a “luminous afterthought”, Zoe/”life” to hide in Adam, but the rulers extract a portion of his power and form a female body around it, Eve. Christ appears as an eagle in the tree of acquaintance of good and evil and compels them to eat from it, causing the first ruler to expel them from the garden, clothing them in “obscure darkness.” Barbelo frees Zoe from Eve as the rulers rape her, giving birth to Elohim and Iaue, also called Cain and Abel. Sophia then sends her spirit of life into Eve so that Seth, “the image of the child of the human being,” is born, followed by his sister (probably Norea).

John then inquires about the conditions of salvation and the Christ explains how the rulers created the “counterfeit spirit” to blind humanity in forgetfulness of its true nature. He describes how the elect were saved from the flood in a “luminous cloud” and, in a final “poem of deliverance,” how the Christ has descended into individuals to awaken them to gnosis.

This blog contains excerpts and updates about the developing fiction series Fire of Norea. For a sample, please see Fire of Norea: From Ashes, first excerpt. For more information about the series, please see the introductory blog post Who or What is Fire of Norea? and please follow us on Facebook and Twitter or visit our official site fireofnorea.com. Please leave feedback, as this is a work in progress. Thank you for your interest!

3 thoughts on “Self-reflection as Creation in Apocryphon of John”