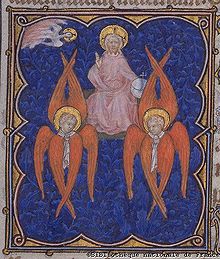 This blog contains excerpts and commentary from the developing the novel, beginning with “excerpt 1”: Fire of Norea: From Ashes, first excerpt. A new blog will be published periodically, up until publication. Please leave feedback, this is a work in progress! Thank you for your interest.

For my Norea readers’ future reference (and for anyone interested in angelology in general) here is a glimpse into my “world building” phase, in which I have simplified the ranks of the divine beings for my series. This is not a plot spoiler, but, rather an ideal structure. These beings will move about in the material world and sacrifice heavenly rank for material desire. Even so, this list will help the reader understand the intended order of the divine beings. The following specifically details the beings you might expect to see in the Fire of Norea trilogy. Where available, I have included references to texts to explain my interpretation of the beings:

I. Highest, of course, is the “Godhead,” the unspeakable YHWH, El Elyon, the “Most High God.” In Kabbalah, the Ein Sof, the perfect wholeness from which all things emanate. The ineffable, unapproachable, unnamable Creator, powerful beyond all comprehension, even among the other divine beings.

The “Curtain of the Omnipresent One,” the “heavenly pargôd,” separates this being from the rest of Heaven, protecting the other divine beings from the destructive glory (Targum Job 26:9; 3Enoch 22B:6). Only the Prince of the Divine Presence, Metatron, also called “little YHWH” and the “glory” or kabod (“body”) of God who sits on the Divine Throne, may approach the pargôd. The pargôd is embroidered with all the deeds and actions of humanity, encompassing all of history.

II. Metatron, the “Prince of the Seven Heavens” (3 Enoch 17): the kabod, the “body” or “glory”, which sits on the Divine Throne (or Merkavah) before the Curtain in the Araboth Raqia, the uppermost region of Heaven. Metatron sits on the Merkavah as the will, glory and body of God. According to the Book of Parables, Chapters 37-71 of 1 Enoch (written very late BCE or very early CE), Enoch was taken to Heaven and transformed into the redemptive figure “son of man,” who sits by the throne and judges humanity. In later texts, particularly the so-called 3 Enoch or “Hebrew Enoch” developed over the first millennium, it was confirmed specifically that Enoch was actually transformed into Metatron, the Divine Judge, who represents Divine Will, sitting on the Merkavah.

III. The “Watchers” or Hebrew ir/‘îrîn, more commonly referred to by the Greek Egrigori or Slavonic Grigori (3 Enoch 28, Daniel 4:13). The powerful attendants to the Merkavah, who watch silently over all Creation and the Seven Heavens.

IV. The Divine Council (Psalms 82:1) of Elohim, “godly beings”, which together ensure order in Creation.

Some known members of the council (the Elohim) include:

-Uriel, the protector of Creation’s order (Book of Watchers)

-Raphael, the executor of judgment (Book of Watchers), who rules over the angels of destruction

-Gabriel, the destroyer of Heaven’s enemies (Book of Watchers)

-‘Opanni’el (3 Enoch 25), who rules over the ophanim (Ez 1, 10), “wheels”, the violently ferocious “mal’akei-chabbalah” who protect the Merkavah at any cost.

-Chayli’el (3 Enoch 20), prince of the chayyot (Ez 1:5), the “holy creatures” who have a vaguely human appearance and continually attend to the Merkavah in praise and worship.

-Kerubi’el (3 Enoch 22), prince of the cherubim, beastlike protectors of the borders between the temporal and eternal worlds.

-Serapi’el (3 Enoch 26), prince of the seraphim (Isaiah 6), the “burning ones” who sing the Qedussah for the glory of the Creator.

-Mastema is in charge of the disembodied spirits (1 Enoch 15; Jubilees 10), antagonizing and punishing humans for the glory of God.

V. The “bene elohim” (offspring of the godly beings: Egregori/Watchers). These are the various created by the Watchers to carry out the judgment of the Divine Council, such as the cherubim and seraphim, already mentioned. Best known by humans are the malakim, “messengers” of Heaven who operate as emissaries between the temporal and atemporal world. Some, such as the malakim Elohim and the malakim YHWH serve specific roles. In Kabbalah it is said the malakim are created for particular roles and cease to exist once their tasks are done. As one character in Fire of Norea: From Ashes explains:

These are the angels closest to us, the bridge between heaven and earth, guiding souls across the boundary and guarding flesh from the immaterial. They can hardly put two thoughts together, dear things, but they are always busy. Always something to do. Their purpose can take decades, to our experience, however, even if their existence seems terribly short from theirs. These are the beings Meister Eckhart refers to: they have their duties as benevolent guides, but if you struggle against them and cling to the flesh, they seem like ferocious demons, tearing you away from life.

VI. Hypostasis: a “hypostasis” is the intrusion of the divine into the physical world, taking on a physical form.

Shekinah: the hypostasis of God. The Creator’s physical aspect is called the Shekinah. According to 3 Enoch 5, the Creator removed the Shekinah from the earth when Enoch was taken to Heaven and transformed into Metatron, the kabod or heavenly body.

The term ishim (“manlike beings” Gen 18:2, Dan 10:5) refers to one of the “physical forms” the divine beings may take (often appearing as a man, depicted in the Middle Ages as a robed man with wings like a bird). For example, Apocalypse of Peter 6-10 states: “And as we prayed, suddenly there appeared two men standing before the Lord upon whom we were not able to look. For there issued from their countenance a ray as of the sun and their raiment was shining such as the eye of a man never saw the like; for no mouth is able to declare nor heart to conceive the glory wherewith they were clad and the beauty of their countenance…for their bodies were whiter than any snow and redder than any rose…I am simply not able to declare their beauty. For their hair was curling and flourishing and fell comely about their countenance and their shoulders…”

VII. Se’irim: goat-like demons (Isaiah 34:15: “The wild animals of the desert will meet with the howlers, and the hairy goat demon (se’irim) will cry to its fellow. Lilith will settle there and find for herself a resting place.” Isaiah 34:21 states, ‘But the desert dwellers will recline there, and their dwellings will be full of howling creatures, and female unclean birds will live there, and hairy goat demons (se’irim) will dance there.” These are the material forms of potentially malevolent beings such as the cherubim, a hypostasis of heavenly beasts materializing on earth.

VIII. The Fallen. The Fallen refers to various divine beings and is not necessarily permanent. The hypostasis of a divine being requires a focus of almost limitless being into a fractional, temporal state that can cause the being to become trapped, to forget its nature, to take on a limited, physical form like a cage. The Fallen are not inherently evil, but they are extremely dangerous to mortals. Watchers, members of the Divine Council and other beings from Heaven can come to earth and be corrupted or trapped by the temporal world.

As an example, Targum Pseudo-Jonathan 28 states: “And he prayed in the place of the house of the sanctuary, and lodged there, because the sun had gone down. And he took four stones of the holy place, and set his pillow, and slept in that place. And he dreamed, and, behold, a ladder was fixed in the ground, and the top of it reached to the height of heaven. And, behold, the two angels who went unto Sedom, and who had been expelled from the midst of them, because they had revealed the secrets of the Lord of the world; and being cast forth they had walked till the time that Jakob went out from the house of his father, and had accompanied him with kindliness unto Bethel, in that day had ascended to the high heavens, and said, Come, see Jakob the pious, whose likeness is inlaid in the throne of glory, and whom you have so greatly desired to behold. Then the rest of the angels of the holy Lord descended to look upon him.”

Some divine beings (such as Mammon or Azazel, for example) choose to live in the temporal world and engage with humans, purely for selfish interests. The Watchers who descended in the time of Enoch (Genesis 6; Book of the Watchers) to engender terrible offspring with human women “fell” in this manner.

IX. Nephilim: the offspring of the fallen Watchers and human women. They were monstrous, indestructible, flesh-eating giants (Genesis 6, the Book of the Watchers).

X. Disembodied spirits of the Nephilim: According to the books of Enoch, Gabriel gave the Nephilim swords so that they would destroy one another. According to Jubilees and Genesis, the great Flood was sent to destroy them. Regardless of how the giants were killed, their spirits survived to afflict humanity. According to Jubilees 10, Mastema of the Divine Council was charged with ruling over the disembodied spirits, antagonizing and punishing humans for the glory of the Creator.